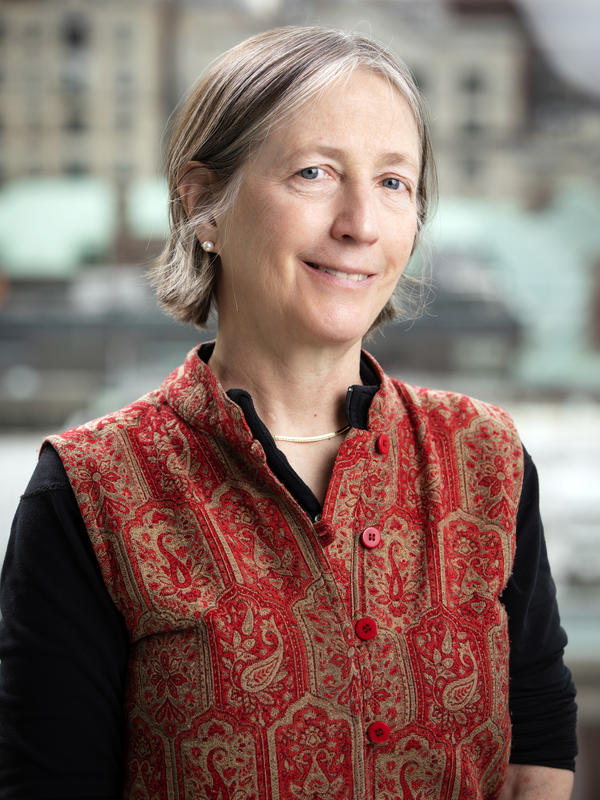 In addition to the degrees listed below, Linn Mehta has studied at the Freie Universität, the Sorbonne, and Universidad Catolica in Lima, Peru.

Her teaching interests are nineteenth and twentieth century Comparative Literature; Literature of the Americas; Core curriculum and historical approaches to European and postcolonial literatures, especially in Africa, Latin America and the Caribbean, and India; Poetry; Modernism and Post-modernism; Literary Theory; Cultural Development; Women and Development.

I have been teaching First-Year Writing and First-Year Seminar at Barnard since 2000 (a year in which I also ran the New York Marathon). In addition, at Barnard I have taught Critical Writing and Writing of the Indian Sub-Continent, and supervised theses in Comparative Literature. Before coming to Barnard, I taught at Columbia (Lit. Hum.), Yale, and Vassar, and since 2012 I have also been teaching upper-level courses at NYU’s Gallatin School of Individualized Study: “Politics, Writing, and the Nobel Prize in Latin America” and “Poetry and Politics of Decolonization.” These courses reflect my deep commitment to teaching Latin American literature both for itself and in parallel with North American and other literatures, crossing frontiers and opening doors for students of diverse backgrounds to share and shape their perceptions of the literatures of the Americas.

Our First-year Writing course pairs readings from North and South America and the Caribbean, starting with indigenous narratives of South and North America: Mayan, Incan, and Navajo. How easy it would be to say “pre-contact,” yet this term is impossible since how would we have a record of these narratives, often oral (though some were written in codices that were largely destroyed by missionaries), if we did not have some contact with them? In fact, these moments of contact are often inscribed in the texts themselves and become a part of their history – of the original recording or written form, and then of subsequent revisions as the oral retelling of the tale continues to influence the way in which it is passed on. The relations between the oral and written forms of language and its transmission continue to fascinate me, not only in the context of contact in the 15th and 16th centuries, but in the context of current cultural formations, including slam poetry, multiple traditions of lyrics and music, and connections between visual and narrative art forms in theater, film, video, and blogs.

Pairing texts historically allows us to look at convergences and divergences in the cultural and political histories of the Americas. It also allows us to trace the emergence of previously suppressed voices from the earliest days of cultural expression. Beginning with indigenous voices, we see the emergence of women’s voices in the 17th century in both North and South America, of Afro-American voices beginning in the 18th century and becoming more forceful from the time of the revolutions in North and South America and Haiti, the increasingly acknowledged LGBTQ identities of some of the most important 19th century American poets, and the ways in which all these voices, immigrant and native, previously suppressed or marginalized in European literatures, come to shape and ultimately dominate literature in the Americas.

I did my Ph.D. at Columbia in Comparative Literature in the Institute for the Comparative Study of Literature and Society, working with Professors Edward Said, Jean Franco, Maryse Condé, and Gauri Viswanathan. I like to look at literature both historically and contextually, using artistic expression as a means of examining questions of political and cultural development.  My thesis became a book, Poetry and Politics of Decolonization (2015), and those three terms – poetry, politics, and decolonization – remain central to my teaching. I come from a family of writers, and in my teaching nothing pleases me more than to be able to help each student shape and clarify her own style of written expression. As an activist dimension of my work, I have also helped to develop a Latinx theater space in the South Bronx called ID Studio Theater, where we explore the rich theatrical traditions of Latin America and work with the community, creating and bringing several new plays to the stage in Spanish and subsequently in English each year.